By Elizabeth Barker | Originally published in the Back-to-School 2019 issue of AC&E.

Educational assessments must include accommodations in the pursuit of accessibility for all, but the development and drive for accommodations on assessments is ever-changing, like a boat drifting between two ports. It seems when accommodations “make shore,” they seem to sit in a unique spot with assessments, like an ecotone of sorts. Accommodations are adopted, but feel transitional, and therefore rarely seem like an organic and fully equal part of an assessment. And then public or industry expectations can change, new technology can arise, and accommodations can drift in a new direction. Let’s review the accommodations landscape—discover the past, highlight our present progress, and uncover new areas to explore.

Diving into the History

The Americans with Disabilities Act became law in 1990. This civil rights law prohibits discrimination against individuals with disabilities in all areas, including schools, ensuring that people with disabilities have the same rights and opportunities as everyone else (ADA National Network, 2017). The concern for inclusion of students with disabilities in assessments started to gain traction in the mid-1990s. When states started to require that students pass a competency assessment to earn high school diplomas, they had to consider the need for accommodations, so that students of all abilities could participate. It became necessary to consider whether and how assessments could be modified for comprehensive inclusiveness (Thurlow & Ysseldyke, 1995).

When the Individuals with Disabilities Education Act (IDEA) was passed in 1997, it confirmed the need for accommodations, requiring that students with disabilities be included in statewide assessments and provided with the appropriate accommodations. Meanwhile, the education scene continued to change with standards-based assessments, and the shift from test publishers’ shelf products to assorted versions of state-owned tests began in earnest (Jorgensen & Hoffmann, 2003). In 2001, the No Child Left Behind (NCLB) Act was introduced and created new requirements and expectations for the results of state assessments and new era of accountability in education (Thurlow & Larson, 2011). The act specifically required the disaggregation of assessment data for specified subgroups, including students with disabilities. Finally, in 2004 the Individuals with Disabilities Education Act (IDEA) was reauthorized and specified that all students, including students with disabilities, participate in state assessments used for accountability.

The legal guidelines and laws described above had a significant affect on the purpose of assessments and the accountability of each state for their test scores. Student testing evolved from state-by-state programs and the choices of classroom teachers to federally mandated and reported summative assessments, which then ushered in interim and formative assessments to support and predict summative outcomes. In the early 90s, many students with disabilities were not included in the assessments, so no data was collected on accommodations. When students were included in the early 2000s as required by NCLB and IDEA 2004, the accommodation policies created were based on little to no data. In fact, a single set of guidelines about what were acceptable testing accommodation for individuals with disabilities did not exist (Thurlow & Ysseldyke, 1995).

In 2009, led by the National Governors Association (NGA) and the Council for Chief State School Officers (CCSSO), researchers and educators across the nation decided to start work on universal academic standards, known now as the Common Core State Standards initiative (National School Boards Association). With the Common Core consortia came an attempt for a national consistent accommodation policy for statewide assessments. Meanwhile, Mike Russell, Thomas Hoffmann, and Jennifer Higgins (2009), were studying how universally designed assessments could support students with disabilities. They called their delivery system NimbleTools, and it illustrated how the principles of universal design could be applied and allow for the flexibility all students need to show what they know and understand. With a list of embedded tools such as a) text-to-speech, b) answer masking, c) color contrast, d) color overlay, e) calculator, NimbleTools introduced the assessment world to the possibility of a universally accessible design system that would support most students. In addition, other researchers were also starting to question the status quo of the creation of the assessments and test items. Some concluded that the processes of building tests and writing test items should remove potential barriers from the beginning, pushing for assessments to allow concurrent and multiple representations of items using different item formats to allow for more access (Ketterlin-Geller, Yovanoff, & Tindal, 2007). This was the beginning of the major paradigm shift for students with disabilities and assessments. 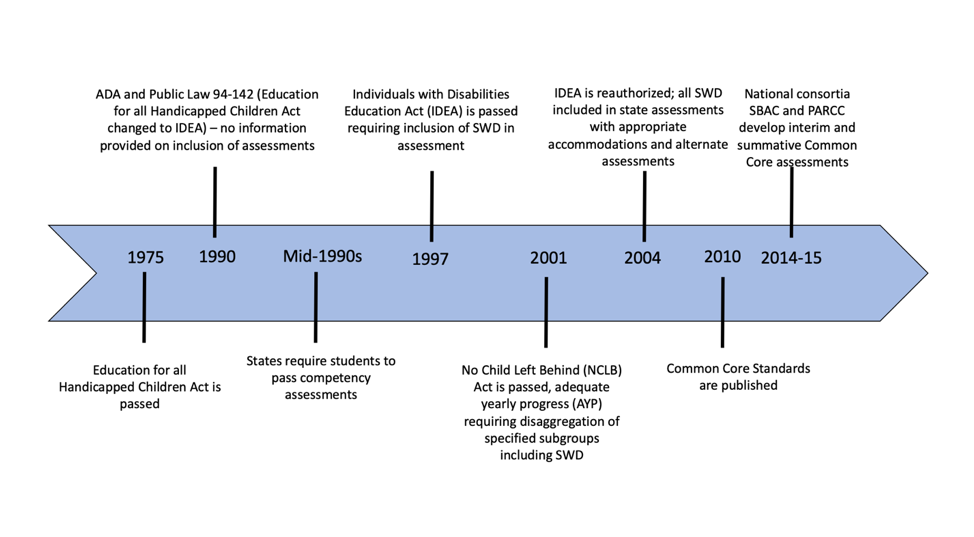 As these principles about universally designed assessments were forming, Smarter Balanced Assessment Consortium (SBAC) and Partnership for Assessment of Readiness for College and Career (PARCC) were listening. Their philosophy for creating assessments was to bring the best educators and researchers together to create two universal assessment systems addressing universal academic standards: the Common Core. Both consortia had the overarching goal of preparing students for future college and career opportunities. The SBAC and PARCC assessments accommodations reached even further; they both start building their assessments with accessibility in mind. The functionality that NimbleTools created was incorporated in SBAC and PARCC assessments, with embedded tools allowing for most students to take the assessment in a more universally designed system and without additional accommodations.

The idea that removing barriers allows for more access into the content and that barrier removal does not look the same for all students was innovative and almost revolutionary. Pushing the status quo on what is considered allowable for accommodations, at the time, seemed risky, rebellious, and empowering. Just a year before, read-aloud assistance on a reading test was essentially never allowed, as it was almost always considered a modification. SBAC and PARCC dived in head first, positing that read-aloud (or text-to-speech) removes the barrier of decoding for those with a learning disability. Instead of being dismissed as a modification, read-aloud and text-to-speech are now standard accommodations for those with reading disabilities. As this movement started to take form, we saw support from the Standards for Educational and Psychological Testing revise in 2014 and dedicate an entire chapter to fairness, describing universal design principles and accommodations.

As the accommodations environment keeps shifting and forming, from “no students with disabilities included in assessments,” to “let’s remove the barriers,” it’s no wonder we see confusion, tension, and misunderstandings with schools and districts. In 2013, SBAC published their Usability, Accessibility, and Accommodation Guidelines to meet the needs of English language learners and students with disabilities. For the first time, there was a framework (see figure 2.) that differentiated between accessibility and accommodations. This became a foundation for a new way of building, creating, and describing accommodations on assessments (SBAC & NCEO, 2018).

How do we Tackle Tomorrow?

In addition to the purpose of these assessments varying, the use of the student data may vary as well: informing teacher instruction, showing student growth, reporting accountability, and showing evidence of an intervention for funding. The question becomes, what is the accommodation policy for the many assessments that are not the state summative assessment? The conundrum is that the state policy is not being used as source of consistency throughout the state—at a district level—as a guideline for accommodations. Many test vendors have their own list of allowable and non-allowable accommodations, which may be based on their own research or empirical evidence. Elements that can be overlooked are the purpose of the assessment and what is best for the student. For some states there could be up to seventeen different types of assessments offered as reliable options to assess students and provide feedback. This may mean there are seventeen different accommodation policies and the district itself may have a different policy from the state. This does not seem like student-centered approach. Many state policies now follow the SBAC or PARCC universal approach to accommodations, including the Council of Chief State School Officers 2016 Accessibility Guidelines. This seems to make the most sense for all of the diverse needs and purposes of assessment.