By Anbu Subramaniyan, originally published in the January, 2021 issue of Equity & Access

For years, I have volunteered at an elementary school across the road from where I work at the General Motors plant in Arlington, Texas. I’ve worked on school supply drives, read to students, and even taught a class through JA (Junior Achievement). It wasn’t until working in the school’s career day that I noticed a glaring and potentially serious gap in what students learned each day: relevance.

During the career day, we asked them what they wanted to do as adults. One after another, the students said a waitress, or a nail salon artist, or a car mechanic, a position likely reflected by their personal experience through a family member. I heard very few students say “an engineer,” even though they live next door to one of the largest car production facilities in the country! Each day, more than 1,300 full-size SUVs roll off our production line and yet very few of these students considered that they could be part of designing and engineering these cars.

At That Moment, I Realized Two Things

First, my perceptions about American education were flawed. Second, I wanted to work with students and show them the skills, exposure, and background in math and science so they wouldn’t have such a narrow view of career possibilities.

This Gap in the Education System Frustrated Me

I grew up in India and came to the United States at 21 to earn a Master’s Degree in Engineering at the University of Tulsa. Where I grew up there were a few high-quality schools, and there were vast stretches of land where rural students had no chance at a high-quality education. I was fortunate however that my parents inculcated that education leads to elevation. I mistakenly believed that children in the U.S. were far more privileged than I and had an abundance of education and access to technology.

I asked the neighboring elementary school principal about this and she told me the majority of her students came from single-parent households. Furthermore, most of those parents don’t have a college degree. She also said that her students struggled mightily with Math. Realizing I could, I committed to working with her students and to share my education story so these students could see how engineering and math fit into the world (which is everywhere).

I also wanted to make Math more fun. If students at Roark Elementary School didn’t overcome their fear of math before middle school, they would balk at algebraic concepts and not develop the logical thinking skills essential to being an engineer and many other jobs.

I Began With Two Projects

One was to work more closely with the school using an AI-inspired math learning app teaching basic math skills under the guise of competition. Second, I started visiting the school so the students could see me as a role model. I am a woman engineer of color making the very cars students see every day on the road. They needed to see this.

It is a safe guess that every student in the country has seen the vehicles that I am personally responsible for engineering. Yet very few people – especially children and those without diverse and strong role models – think about the science and engineering behind getting those cars from idea to the road. I’ve now worked with hundreds of students and their teachers and if we can make math fun and connect it to everyday objects — like shiny new cars — we will overcome their fear.

It was easy to visit the students because they were right across the street but I have been involved in this effort nationally for many years through Nepris. Nepris connects working professionals with teachers and their students so that we can bring working world relevance to classroom learning. This has the double benefit of not only motivating students to pay more attention to their lessons but it makes it more personal.

Now, rather than just looking at Math as something abstract and unattainable, Math would feel real, because a live person whom the student met uses Math every day in their work. That’s priceless.

My employer, General Motors, is just as committed and in fact supports several efforts like this. General Motors provided funds that a neighboring school needed to buy NumberSense, the aforementioned math app, and train teachers how to use it. My fellow GM engineers and I also meet with students using Nepris, which is a virtual platform bringing real-world relevance to STEM in classrooms.

This two-pronged approach is important

Making Math a bit more fun might keep students engaged for a day or two. But, talking with students via Nepris gets them excited for life. The personal connection is the difference. We can show children our plant and the work
we do, and it’s all virtual, which has been particularly handy in this pandemic. Students see first-hand how the math they learn in school connects to life and we engineers and scientists don’t have to leave our offices.

We’re being successful in Roark Elementary School. Fifth-grade teacher Marlynn Tatum told me that all of her students showed at least 20 percent improvement in the state’s benchmark tests, with some student gains as high as 67 percent. While the experiment with NumberSense started in fifth grade, today more than 359 students and 21 teachers at Roark participate.

I don’t expect all these students to be engineers like me, but I am hopeful that their improvement in math and awareness of what engineers do will expand what jobs they hope to have in the future. Knowing that I work daily with robots and that I love my job gives them a sense that they too can aim high. And, overcoming any fear of
math while in elementary school sets these students up for a future where they delve deeply into STEM subjects.

The reality is that more than 80 percent of future jobs, especially in the automotive industry, will touch STEM-related subjects one way or another.

When I take students on tours of our 125-acre plant that employs 5,000 people, they are amazed to see humans working to assemble automobiles next to robots. These electricians, welders, and die fitters fill high-paying jobs that don’t demand a four-year college degree. Students can learn these skills and more at local trade schools. Once I overheard a boy telling his father that the tour, and tram ride around our facility, was better than Disneyland. Between that and when a child asked me what they need to do to be an engineer like me, I know we’re making a difference. 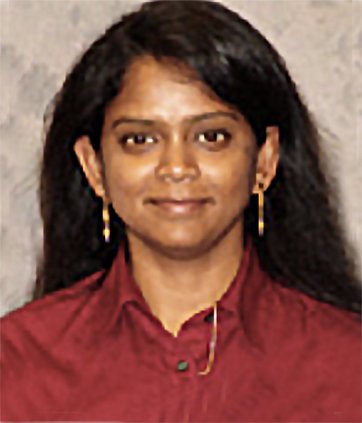 Anbu Subramaniyan is a quality manager in the metal stamping division of General Motors. She works in the company’s Arlington, Texas, plant and is the chair of GM’s Women in Manufacturing employee resource group. As an automotive industry executive for 20-plus years, Anbu has worked in the fields of assembly, supply chain, maintenance, and quality assurance. In addition to her work at Roark Elementary, Anbu also works with high school students in her area, mentors graduate students in Dallas, and is the Dallas lead for Isha Vidhya, a nonprofit that focuses on rural education in India.