By Maya Goodall and Kristie Shelley, originally published in the March, 2021 issue of Equity & Access

When we first started our teaching careers, we had no idea that there was an ongoing vigorous debate about whether learners could learn to speak, read, and write in two languages at the same time. Politicians, educators and parents all weighed in on the topic. Eventually, in California, it went to the public and voters passed the then Prop 227 or English Only Law.

The thinking was, it would be much easier for students to achieve academic success if they focused on one language only, English. Research has since revealed the human capacity for bilingualism.

Human beings are uniquely wired for language and are capable of learning more than one language at a time.

After years of teaching Emergent Bilinguals, coaching teachers, curriculum directors and administrators, we wrote a curriculum that blended practical knowledge from the classroom with research-based applied linguistics. Through our experiences with students, we realized there was a huge opportunity to engage in more speaking, listening, and grammar in English language instruction. We noticed that there were not enough of these activities happening in classrooms for students to truly master English.

Applied linguistics validated our experiences, with the Output Hypothesis

Applied linguist Merril Swain did an intensive study with seventh graders in Canada who had been in a French immersion program starting in kindergarten. She expected the students to be better equipped to carry on conversations than they were. What she found was that they were not on par with language proficiency levels
expected after years of instruction. This prompted her to come up with the Output Hypothesis, which in a nutshell states: in order to learn a language, you have to speak the language.

However, most U.S. classrooms focus exclusively on the listening portion of language learning. Comprehensible input has been the most widely used theory in teaching language and is based on the idea that the learner needs input that is understandable, according to their language proficiency level. It is theorized that through this input the learner will eventually create their own output. (Krashen & Terrell, 1995) However, a quick glance into language
proficiency data of students shows that there is an opportunity gap.

We wanted to fill that gap with a curriculum focused on speaking, listening, and grammar

Our curriculum centers around this concept: help teachers engage in academic conversations with students. When a student is involved in conversation, they have an opportunity to notice. The learner/speaker notices what they are saying; how they are saying it; and they are getting immediate feedback from the listener. (Swain) All of this information is vital when piecing together a new language and integrating it into new knowledge.

Yet, when we talk to teachers, we hear they are overwhelmed with everything they already have to do in class and giving learners time for speaking practice can sometimes feel out of reach. This is why we used AI and speech recognition to help with this repetitive and ongoing task. In Rosetta Stone English, the learners practice speaking with different characters, using academic language. The language the learners speak was carefully crafted from language proficiency standards and content standards. The learners have the opportunity to practice academic language at their level, speaking on topics that they will hear about in their subject matter classes.

During the exchange between student and AI, the speech recognition engine is capturing data for the teacher, and lets the teacher know if a learner has mastered a specific grammar skill. If not, the teacher will be directed to teacher-led lessons they can use to reteach a needed skill. In this way, we have used AI and speech recognition engines to help teachers give the all-important speaking practice, without adding more to the teacher’s plate. The teacher can focus on their content instruction and engaging in conversations while giving very specific, targeted language instruction when necessary. In this way, the program is personalized and engaging for each student.

The difference in this curriculum is built into the algorithms. Everything learners say is counted, measured and weighted, then the data is disaggregated and given back to the teacher. The teacher will know the language proficiency level of the learner, specifically what skills they have mastered and what they still need to learn and be equipped with targeted lessons to ensure mastery in addition to having the ability to monitor progress daily. When it comes to language proficiency, this truly is data informed differentiated instruction.

In addition to cutting edge language instruction, our curriculum is based on culturally responsive teaching. This means we used AI to create an environment where the heritage language of students is a culturally relevant asset for them, not a deficit. We like to focus on what the learner knows (their heritage language) and who they are going to become (bilingual). 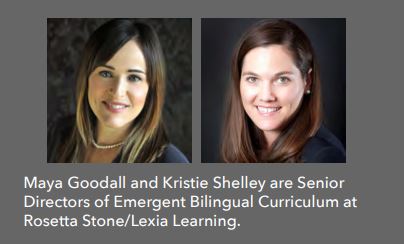 Instead of thinking of learning English as a zero-sum game, we like to think of it as a win-win: learn English and become bilingual. Twenty years on Prop 227 was outvoted in favor of Prop 58 The California Multilingual Act. It
seems that parents, teachers, and voters have come to understand that in addition to proficiency with English, bilingualism has its benefits.

Indeed, helping learners become bilingual is a contribution to society. Curricula should seek to honor bilingualism, heritage language, and culture while teaching English.